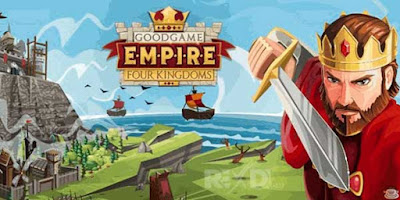 Empire Four Kingdoms – Fight epic battles, win glorious victories, and form powerful alliances with thousands of other players on a giant interactive world map. As king and lord, you have been called upon to build a mighty fortress and control the fate of your kingdom.

Conquer new lands in four exciting kingdoms: recruit an army of valiant knights, equip your merciless troops with deadly weapons, and send them into battle to fight under your banner! Of course every great empire also needs a strong defense – choose the right strategy to send your enemy’s army fleeing in terror!

Honor, glory, and riches! Win rewards by achieving honor and glory in battle, and go from rags to riches by managing your kingdom wisely. Build your fortress from the bottom up so that it becomes the greatest in the land. Produce resources and trade with other players to expand your empire in multiple kingdoms. More land means more subjects – and more gold for you!

♚ Fight epic battles against countless other players on the interactive world map
♚ Build a majestic castle to withstand even your strongest opponents
♚ Raise an army of knights, archers, swordsmen, and more
♚ Form an unbeatable alliance with your friends and other powerful players
♚ Produce and trade resources to construct more than 60 different buildings
♚ Regular updates with new content and challenges
♚ Quick and easy support in your language
♚ Explore the four kingdoms now and become a legend!

WHAT’S NEW
KINGDOM’S LEAGUE
Armies from the neighboring realms lay siege to the Great Empire – it’s time for the brave warriors of the land to draw their swords and defend their lands. The Kingdom’s League has arrived! Castle lords now have the opportunity to earn valuable rewards by competing with their rivals, collecting Kingdom titles and climbing the league rankings. Check the forum to learn more about our latest updates!