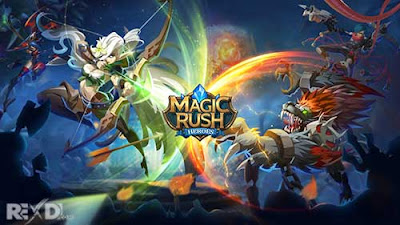 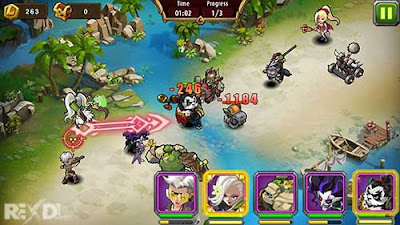 Features
Summon Powerful Attacks With Skill-Aiming
– Manually choose targets or directions when casting skills. You call the shots!
– Summon attacks to stun, silence, knock airborne, heal and even interrupt enemy skills using precise controls
– Strategy and speed combine. Master them both, and victory is truly in your hands!

Hero Training Powers You Up to Defend the Kingdom
– Role play as diverse hero types, including dozens of unlockable heroes with hundreds of distinctive skills.
– Heroes can be combined in different ways and take the opposition by storm.
– Upgrade your defender with equipment enhancing, rune inlaying, and unique upgrades and abilities for every kind of weapon.
– RPGs and RTS combine to bring you the ultimate Equipment System.

PvP Games in the Ladder Tourney
– Charge to war in a global, cross-server PvP Arena with a turn-based ban/pick phase to level the playing field.
– Defend your victory by strategically banning your opponent’s heroes depending on your own battle plan.
– PvP combat offers awesome rewards for every season!

War Strategy and RTS Gameplay
– RTS combat challenges you to build your tower, upgrade your tech, and dispatch your armies to plunder resources from enemies.
– Defend the kingdom together! Create alliances with millions of players from around the world to thrive in this war-torn landscape.
– RTS battles let you conquer enemies to become the dominant alliance!

Hero Tower Defense Combines Your Favorite Strategy Genres
– An all-new “Hero Tower Defense” concept cleverly combines the heroes of the game with dozens of exquisitely designed Tower Defense stages.
– Drop tower emplacements and activate Hero abilities in real time during exciting battles that you won’t want to put down!
– Defend your based on one-of-a-kind map creations.