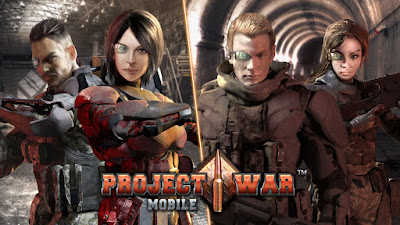 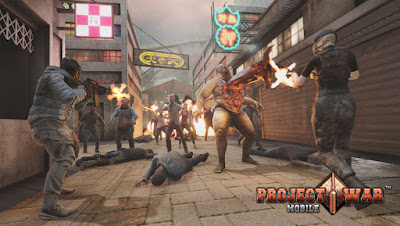 Gripping story
Project War Mobile’s story mode is unique to shooters and tells of the zombie SCUM and how they came to be. Play the role of an operative genetically bred and built by Seventh Sanctum as you unravel the mystery of the undead. Watch the action and drama unfold as we update the story every season!

Competitive play
Fight in ranked matches against online players around the world, climbing the ranked ladder to be number 1! Play in classic team death match, where we pit 2 teams of 4 against each other, control, where the teams each try to get the most amount of time on the control points, free-for-all, where all 8 players vie for ultimate supremacy, as well as various other action-packed game modes we will introduce in future updates.

Something new and refreshing for an FPS
Level up your character while also upgrading your gear and guns to the best it can be. The story mode even includes its own bosses, whom you can defeat with the help of your friends. Create your own clan with your online friends of up to 40 players and get unique items by defeating each PvE level. Finally, track your progress with our very one Battle Pass with 200 levels full of big rewards.

High graphics and detailed animation
PWM is an online FPS designed natively on the mobile platform built on the latest version of the Unity 3D engine, optimized to adjust to every smartphone for the best game performance. Actions can all be performed with an easy push of a button. Play on our suite of realistic Hong Kong maps and more as we update the game.

Customisable characters
Customise your character by equipping them with different gears like helmets, vests, bags, and costumes. Each piece of gear not only looks unique but also has it’s own abilities, which you can use to wage war on the opponent.

A plethora of guns and weapons to choose from
Each weapon has its own unique set of statistics and abilities. Guns can also be equipped with attachments such as silencers, gun clips, and scopes. Players can now demolish someone with grenades, slash the opponent with a katana, or shoot the unwitting enemies with a silenced rifle.